Games Like Valheim | Best Top 4 You Need to Play

Valheim is an excellent entry in the action survival genre. With a complex crafting and base-building system and an engaging combat system, it’s easy to see why Valheim’s gameplay recipe works. If Valheim has you hooked, we have the guide for you. We’ve prepared a list of games like Valheim that players can check out if they’ve played Valheim and are looking for new survival games.

One key element of all games like Valeheim on this list, and Valheim itself, is the possibility of starting your dedicated server to tailor game settings to fit your playstyle. Best Game Hosting has ranked the best hosting provider for these titles and more to ensure you get the best possible value when selecting a dedicated server provider. If you need a hosting provider, take the time to review their ranking of the best servers for Valheim and all your favorite survival titles!

Read on to find the next gem for your building-fueled adventures!

This top-down vampire-themed survival crafting title is a perfect choice for gamers who love Valheim but want more combat.

This game features a lot of action; it has melee and ranged armaments with accompanying weapon skills. It also features magic abilities, ultimate moves, and complicated enemy move-sets. Players will want to learn foe’s attack animations, as dodging incoming damage is critical to success.

Players progress through a story questline and defeat many bosses along the way. Quests and bosses unlock new crafting recipes players can use to expand their castles and create new equipment. 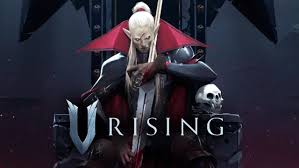 Vampires may be powerful and immortal, but they are not invincible. The game has several mechanics to challenge players despite their undead strength. The sun poses a constant threat, and players must adapt to the day and night cycle, hiding and constructing their base during the glaring sunlight and hunting the living under the welcoming glow of the moon. Garlic or holy auras fortify many settlements, with each inflicting debuffs and damage, respectively. Players will rely on gear and consumables to overcome these obstacles in their journey to become a terror of the night.

Solo play is possible, but this game shines with multiplayer. Vampires can form clans of four members, each able to build 1-2 bases depending on server settings. With your team, strategy, and preparation in tow, you can put up a fight against even the most difficult enemies.

Certainly a more lethal option, Project Zomboid is a game about inevitability. Because of a rogue-like permanent death mechanic, Project Zomboid can be a tense and rewarding survival crafting experience.

Players spawn in one of several maps during the early days of a zombie pandemic. They will quickly need to gather weapons and supplies and avoid the undead until they have the equipment to face them.

This game requires players to monitor in-game statuses. Thirst, hunger, exhaustion, and sleep are all conditions players will need to maintain to avoid harsh debuffs. Survivors need to track down food, water, and a base where they can sleep and recuperate.

Project Zomboid characters have skills that act as the progression system. Players increase their skills with related gameplay, reading magazines, and watching TV (the zombie apocalypse doesn’t sound so bad!). These skills allow you to build and manipulate the environment to even the odds and boost your survival chance.

Raft is one of the other great games like Valheim but for the player who yearns for the open sea’s beauty and danger. This survival game finds players on a small raft, stranded in the middle of the ocean. Armed only with a plastic hook, characters attempt to eke out a living on the endless water by fishing for floating debris. 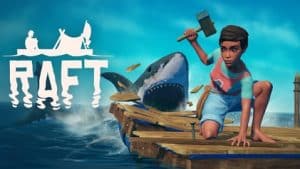 In this game, players need to eat and drink to stay alive. Food is gathered by defeating or taming animals, and water is collected with water filters players learn to craft during the game.

Raft is a game about exploration. Small islands dot the seascape, and discovering them is how players progress. Newly discovered islands hold valuable recipes, which players learn so they can craft new items and expand their raft. You can learn more about Raft in this Raft walkthrough and story guide.

Rust is one of the most popular survival titles, with many comparisons to Valheim but allows players to use more modern technology.

Rust offers a robust progression system. The game begins with players wielding sticks and stones; they can also build rudimentary wooden structures. Eventually, players will find enough scrap that will allow them to advance to the next tier, leading to metal buildings and comparable weapons. 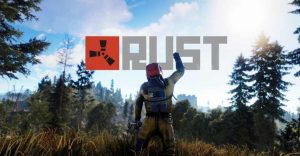 Players will need to eat and drink to maintain their health and ability to run. Water can be drunk straight from any river in the environment. Players can also craft water catchers, which players can use to drink straight from the tap or to fill water containers. Fruits and vegetables are found in the wild and are the first things players will find to eat. Once players are armed, they can hunt and harvest meat from the animals scattered around the map. Cooking raw food is always preferred, as uncooked food spoils and can poison you.

Rust is a PvP game at its core. Raiding is a notorious feature of the game and incentivizes attacking and defeating your fellow players in an attempt to break down the walls of their base and take their loot.

There are plenty of survival games out there to choose from, but these top 4 are the closest to Valheim. These 4 games like Valheim have the same tone as Valheim, but have different attributes. Depending on what you find the most exciting, it should be easy to choose the right game to go for next. Will it be more combat and magic, more intensity, more open-sea dangers, or more modern technology? The choice is yours, or you could try all 4!

Good luck out there, survivors…