Using the foundation of the maps as a reference, players have determined the base area of the core game is about 44sqkm. Using the same method, the Isle of Siptah is about 33sqkm. This comparison means that the new expansion’s Isle of Siptah map is roughly 75% the size of the core game’s starting area, the Exiled Lands. The map contains many wide and flat areas that are suitable for the construction of large castle bases. Because of this type of layout, this new Isle of Siptah map is more focused on PvP than the Exiled Lands. 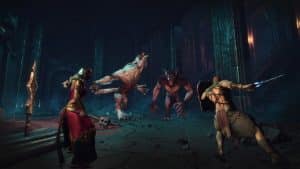 Within the isle of Siptah, players will encounter Elder Vaults. These dungeons are filled with nasty critters to defeat and puzzles to solve. Within these encounters, players will face demon spiders, fiends, harpies, goblins, and other eldritch horrors who protect valuable treasure and riches for heroes to collect. With 14 vaults total, gamers will have their hands full trying to conquer them all.

Fans of the base game will find that the usual gameplay loop will remain unchanged. Players will start on one of the island’s shores and will quickly find resources close by that they can use to build a base and establish a foothold for their future conquest. Crafting is still a vital part of this entry, and you’ll use resources to make tools, weapons, and shelter.

It’s possible to play this expansion alone, but Conan: Exiles is a multiplayer experience. This recent expansion is no different. Attacking and defending against human enemies is still a constant in this new land, and it always helps to bring friends. If you want to play with friends on your own server, check out my list of the best Conan Exiles Server Host. 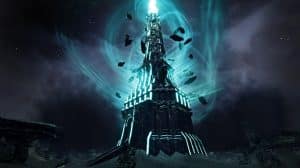 The main objective of this new campaign is a bleak, looming tower centered on the map. This spire is the source of powerful storms, called Surges of Sorcery, that spawn randomly and wreak havoc on the environment. These aren’t just any storms. Instead of rain, these storms precipitate giant tentacles and horrifying creatures that will attack anything, including other monsters, on sight with extreme aggression. Upon defeat, these beasts will drop rare loot that won’t spawn anywhere in the world, so preparing for this task will be high on the player’s priority list.

Obtaining thralls isn’t the same as it is in Conan: Exiles. In this expansion, the player gains thralls two ways.

During the Surge of Sorcery storm events, a giant tentacle will appear. At the site of this tentacle, thralls will spawn for players to collect. Fast action is needed as it is a race against the clock to capture and retrieve thralls to be put to work. This method relies on a random event. Players will need to be prepared and act quickly.

The following method is more reliable. Adventures will need to brave the Elder Vaults to obtain a rare resource. Within the Vaults, players have a chance to receive Decaying Eldarium, a mysterious and secretive metal. When used at temples, this item gets consumed to summon new thralls. While more reliable, this method can be more time-consuming as it requires farming vaults often.

Players decide how to spend their time as thralls are a necessary element for progression.

In Conan: Exiles, characters can elect to practice a religion and worship various gods who grant items and perks. The latest god, Zath, offers players weapons and armor and the ability to summon a powerful spider avatar that has a ranged siege attack and the ability to spawn spiderlings. While this avatar is incredibly expensive, it is still an exciting feature within the Isle of Siptah.

Another great feature is the ability for players to craft purebred rhinoceroses that act as mounts. They are slower to regenerate stamina than horses and cannot jump. Increased health and a chance to attack makes up for the drawbacks.

Conan: Exiles is a resource-intense game, and this expansion contains some of the same flaws the base game has with performance. Even powerful setups may run into issues where game assets disappear and reappear randomly. Objects can also clip through the environment, breaking the immersion in a game where visuals are part of the experience.

The game still suffers from a lack of impact feedback in combat. Axe and sword swings will register as hits but will not cause a reaction from an opponent. Some players may not like this as it can be a jarring and unrealistic experience.

These issues are common in MMO games, and players may find these issues to be tolerable and an acceptable compromise in an otherwise content-filled experience.

The Isle of Siptah map expansion contains a massive island filled with content that will give veteran players hours of more places to explore and resources to collect. This entry sticks to the base game’s mechanics while providing players with new items and unique experiences not found in the base game. If you’re a fan of Conan: Exiles, this is an expansion you want to check out.